This month marks Tabitha Cambodia’s 25th anniversary. It has been and continues to be an amazing journey. We began when Cambodia was still in transition from a country devastated by war, genocide, isolation by the international community, insecurity through war lords and transition to peace – life when we started was worthless – taking life and causing mayhem amongst the population was the norm. 25 years later and Cambodia has achieved a modicum of peace. Life is more valued now – discussions now focus on where the country wants to be in the future – questions that are not easily discussed or answered.

25 years ago, 99% of the people lived in great fear – insecurity was rife. 90% of the people lived in makeshift homes – finding a livelihood that brought food each day was a challenge – travelling from place to place in the country was full of danger. The infrastructure was minimal at best – lack of all basic essentials was a struggle. 25 years later security has improved considerably, the infrastructure continues to improve at a rapid rate – people tend to eat every day – are able to work if they wish to do so. 25 years ago the population was 7.2 million – 25 years later it is 17 million and growing – so much change – so much better.

Tabitha Cambodia was privileged to be a part of this transition to peace. When we started, travelling within the city was fraught with danger – working with families who were fearful and traumatized taught us so much about the strength of the human spirit – taught us all about respect and dignity for each person – taught us the value of each life – inestimable value despite coming out of an era where life was worthless and people were reduced to things – their only value was to be used, abused and thrown away.

In this 25 year process, Tabitha Cambodia was privileged to work in 17 provinces transforming whole villages in our work. We were humbled by the need to show respect and dignity to the people we worked with by instituting a savings program that focused on the dreams and visions of each family – we were entrusted with their funds – entrusted with their dreams. To date 579,546 families with 4,610,127 dependents have been served. Their dreams of basics, food, clothing, shelter, income generation were met – we were cheerleaders in that process.

In this 25-year process we enabled 12,586 families to receive a new starter home – moving from 2 square meters of living space to 20 meters of living space – we were humbled by 27,102 volunteers who came from all over the world to help pay for materials and to help finish these homes. These starter homes became the means for our families to continue the process and end up with firm stable homes – expanded, refined and meeting the needs of the families. We cheered as another 424,746 rebuilt their shacks into beautiful homes through the savings and income generation projects they did through savings. It is so very good.

We were and are humbled by the women who had been involved through the sex trade to become women of beauty and dignity through the making of silk products – we enabled more than 400 silk weavers to rebuild their lives; we watched as the silver smiths rebuilt their home villages. We stood with our women living with AIDS be able to rebuild their lives; to retrieve their children and raise them well – we did this through selling more than 10 million USD worth of products.

We watched as vast areas in our programs were changed from dry barren swathes of land, to food bearing and animal husbandry oasis of prosperity through the installation of water sources – 22,052 sources impacting the lives of thousands of families throughout Cambodia.

25 years ago when we started, schools were just beginning to open – education had been destroyed – we were humbled by the desire of old and young to learn about how grass grows to why does the sun come up every morning – we were and are privileged to have built 94 schools, impacting 58,368 children in our projects – schools that will continue to serve as the future becomes the present which in turn has a future. It is wondrous to imagine all the children that have been, are being and will be impacted by these schools.

Over the past 25 years we have been struck by the reduction of gains made by families destroyed through illness – illnesses which can be diagnosed and treated in the Western world – our response has been to start a process of impacting this scourge through the building of a women’s hospital – Nokor Tep Women’s Hospital. We are privileged to have been a part of the opening of the doors of this hospital in our 25th year. We are humbled by the vision of the hundreds and thousands of women who will be touched by its healing powers over the next 25 years. 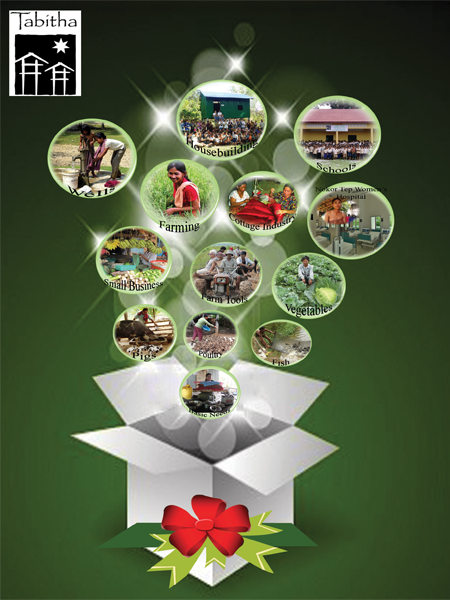 I am humbled by the Grace that God has shown myself, Tabitha and Nokor Tep – His unfailing mercy in all these years – His steadfastness when we were not so steadfast – His care when we were weak – His joy when with each family we touched. It cannot get any better than this!

Thank you for these 25 years – stand beside us as we start the next 25 years!

About Us Jannes Newsletters

Jannes Newsletter March 2022
Dear friends and partners, Water is a gift of life – it gives life to our bodies, nourishes our fields and allows life for our animals.  We had the rare...
515 Likes

Jannes Newsletter February 2022
Dear friends and partners, This morning I would like to introduce you to Suos Heng who is the Acting Director of Tabitha Cambodia. Heng has been with us for the...
513 Likes

Jannes Newsletter January 2022
Dear friends and partners, One of my greatest pleasures in life is going on site visits to our Tabitha Cambodia projects. My erstwhile companions are Heng who is the acting...
515 Likes